7 steps to a zero-waste society 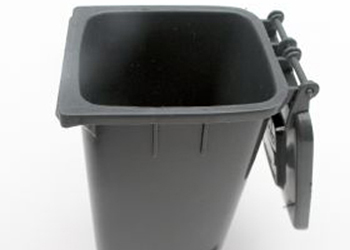 A zero-waste society is a concept that many people have talked about, but is it feasible? Just about everything in our society is designed to be disposable, single-use, or discarded one day in favor of something newer and better. With this mindset, can we ever create a sustainable zero-waste society? I think so.. if we take steps to reduce our needless consumption, but also redefine what we think of as â€œwasteâ€.

When a tree drops its leaves to the ground, are the leaves waste? They’re no longer of use to the tree… but they’re still useful as biomass. Soil bacteria, insects and weathering break down these leaves to replenish the soil. What if we could copy this model for our waste products?

William McDonough in his book Cradle to Cradle outlined the simple premise that in nature, waste equals food. Whatever one organism leaves as waste, another organism is able to use as nourishment. Adapting this to our consumer society, we arrive at the need for products to be beneficial (or at least benign) to the environment, and able to break down or re-used in a useful way. The solution to this problem is in the hands of the manufacturers, as they are the ones who produce the items and materials that so quickly become waste. The abundance of waste associated with our products brings us to step 1.

Last year I received a handheld steam cleaner as a gift, and when I opened the cardboard box inside there were cardboard forms to hold the cleaner in place, admittedly a better option than solid Styrofoam forms. The cleaner itself was in a plastic bag, beside that was the instruction booklet, also in a plastic bag, and alongside that was the accessory bag which contained the various nozzles and other accessoriesâ€¦ each in their own individual plastic bags. This isnâ€™t the only time something like this has happened; in fact most products are grossly over-packaged. The very act of opening a new product generates instant waste from the plastic wrapping, the cardboard box, and anything else. This isnâ€™t necessary! Reduce the amount of packaging for our products, and that will immediately reduce the amount of waste produced. Some products require a certain amount of packaging however, so for those instances a new type of material would be a good choice.

Step 2: Use biodegradable materials for all short-term uses

Food and other product packaging is over-designed. A disposable plastic cup, container or bag can be used over again, but for most people they are used once and then discarded. Since they are commonly made of oil, they take a little while to break down in a landfill; somewhere around a few thousand years. This is a terrible waste, and can be remedied by using biodegradable plastic for all short-term uses like packaging, food containers and disposable bags. Cargill-owned Natureworks has developed a corn-based plastic that is an ideal replacement for all types of food and product packaging, with all the benefits provided by short-term-use plastics, but is also fully biodegradable in a composter. Why is this a better option than recyclable oil-based plastic items? It’s a better option because not every recycling facility has the means to recycle every type of plastic, but every compost pile has the ability to break down a PLA object. There wouldn’t be any difference to the consumer in regards to the performance of the product, but instead of being thrown in a garbage or recycling bin, it could be tossed into a composting bin and would disappear within a matter of weeks. This isn’t as ideal as sitting down in a restaurant and using a reusable ceramic mug for your latte, or taking your own bag to transport vegetables home from the store, or any other application, but it is just as convenient as the current practices. It’s also comparable in price, and might be cheaper soon as oil prices rise and oil becomes too expensive to just burn and throw away. Several environmentalists have criticized Natureworks plastics because they are made with genetically modified corn, but it may be possible for the plastic to be made with organic corn as well. These biodegradable materials can be composted to produce only carbon dioxide (CO2), water, inorganic compounds and biomass. Disposable packaging isnâ€™t the only thing that can be composted of course, food waste is also ideally suited for this natural process as well.

Step 3: Compost as much as possible

Composting is natureâ€™s way of disposing of organic matter. Composting works most efficiently in a controlled pile or bin, but any organic scraps will break down on their own if left on the soil. Many people have compost bins or piles, but this requires space and isnâ€™t always suitable for many city dwellers. Thereâ€™s the NatureMill composter, but itâ€™s capacity is rather small for home use especially if bioplastic shopping bags and containers are being put into it each week. The NatureMill or something similar would be good for home use, but for public use sealed bins on the street could be a viable option. The bins would ideally be in shaded areas, and be insulated to prevent the contents from heating up and rotting before the composting process can begin. Sensors in the bins could alert pickup crews when the bins were nearing capacity, so they could be emptied when needed. If food packaging is made of biodegradable plastic, then a container of waste food could be tossed into a compost collection bin and none of it would result in physical waste.

Step 4: Use reusable containers whenever possible

Most people are already familiar with the practice of returning empty beer bottles and wine bottles for re-use, this can be extended to other types of bottles and jars as well. People used to re-use jars quite often, in fact mason jars are still available for canning and preserving; only the flat lids must be replaced for re-using the jars. I store rice in a plastic container with a spout for pouring, itâ€™s very easy to go to a bulk food store and fill up the container to bring home. The only possible issue with this is finding a store that will let you bring your own containers in. This could be remedied by choosing a bulk product that came in a biodegradable container as well, but for anything that uses glass itâ€™s not an option. Glass bottles and jars should be re-used as much as possible, but when they are unable to be re-used the best option is recycling.

While weâ€™re in no danger of running out of sand, glass recycling is still a good idea. The material is already glass, so it just needs to be melted and reformed; raw sand requires much more work to produce new glass. Metal recycling is absolutely essential, as mining is a terribly destructive process; especially bauxite mining to get aluminum. Ideally the process of recycling would be true to itâ€™s name, however in most cases itâ€™s actually â€œdowncyclingâ€; the resulting material isnâ€™t suitable for the same use and becomes a much lower grade material. This is because most objects are made with a mix of materials for various reasons, and result in a non-pure mixture when processed. The only way to deal with this is by following one of Stephen Coveyâ€™s 7 Habits: â€œBegin with the end in mind.â€

Products such as cars, computers, furniture, appliances and textiles are typically designed to be delivered to the consumer, and after that itâ€™s up to the consumer what happens to the product. What usually happens are the products ending up in landfills, where they release toxic metals or other chemicals to the environment. If product designers and manufacturers look at what will happen to their products after they are discarded, and are actually made responsible for their products, then the materials and techniques used for the products will inherently be sustainable. Several countries in the European Union require electronics manufacturers to accept their products back for recycling, a process beginning to make its way to North America. Ray Anderson developed a very sustainable business model for Interface, his textile business. In that model, instead of a one-time sale of their product (carpets), they treat it as a long-term service. At the end of the useful life of the product, the carpet is pulled up and returned to Interface for recycling; made possible because the carpet was initially designed with this in mind. This same principle could be applied to cars, computers, electronics and anything else. In order to make it easy, a simple RFID tag could be integrated into a device indicating where it is to be sent to be recycled, and then it could be dropped off at a depot. With companies made responsible for the end of life processing of their products, the products would very quickly become recyclable, non-toxic and efficiently assembled/disassembled.

Just about any product can be dealt with using some variation on the steps listed above, but there will always be exceptions. Some items such as glued or painted wood, sanitary waste (diapers, feminine products, condoms, and any waste that may be contaminated with infectious diseases), as well as medical waste products including organic matter, used needles and tools, and latex gloves, arenâ€™t suitable for recycling or composting. These items can still be dealt with, using a method such as incineration in a waste-to-energy converter, turned into oil with the Thermal Depolymerization Process, or reformed back into the original molecular components with Plasma Pyrolysis. The byproducts of these processes are able to be used, including oil, gases and ash; suitable for mixing with cement for construction purposes.
Ultimately, the best way to reduce waste is to simply reduce consumption. Even with fully recyclable and biodegradable product packaging, and products that can be returned to the manufacturer for processing, if we maintain our needlessly wasteful consumer lifestyle, there will still be a waste of energy, time and money.

I envision a future where there are public waste receptacles that accept recyclables, compostables, and used products to be sent back to the manufacturers. Robots could sort the materials and transport it to the proper location for processing, handling everything from emptying street bins to sorting bottles inside the recycling facility to delivering cleaned bottles back to food production locations, and delivering finished compost to farms or parks. With proper product design, any product disposed of in a public place would go into one of these 3 places. There would be similar sorting in the home, with the addition of a sanitary waste disposal for items to be burned or otherwise destroyed. There wouldnâ€™t need to be any thinking involved, as the infrastructure, economic model and product design would ensure proper disposal, and as more products and materials adopted this system, we would finally approach a truly zero-waste society.