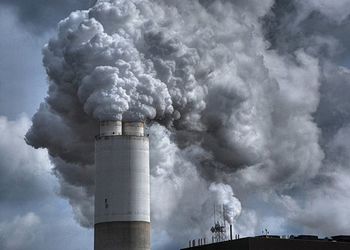 The idea is quite simple in concept; a rocket derives its thrust from exhaust expanding rapidly out of the combustion chamber through a nozzle. During this expansion, the exhaust gases cool considerably, some components even below freezing. This is the effect ATK plans to utilize with coal plant smoke stacks. By pressurizing the exhaust gases and then letting them expand through a rocket nozzle, the carbon dioxide will freeze into its solid form of dry ice crystals, which can be captured.

Conventional chemical scrubber technology typically increases the cost of coal-derived electricity by 80%, ATK estimates their technology could reduce that to 30%. The company plans to commence laboratory testing of the idea within 14 months, with tests on live power plant stacks after that.

The better solution, of course, is to plan to stop burning coal as soon as possible, but until that happens technology that removes as much carbon dioxide from the exhaust gases is worth looking into. This technology could have benefits for biomass power plants as well, capturing the carbon from the burning of a carbon-neutral source is a very interesting idea.