Airships could be the future of eco-friendly air travel 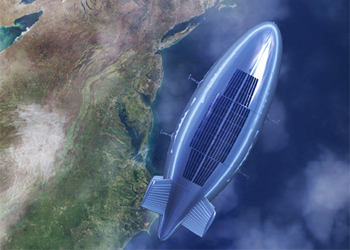 As author George Monbiot wrote in his 2006 book Heat, conventional air travel is unsustainable, no matter how you look at it. The carbon footprint of a jet is immense, and his controversial solution for this problem is to curb our use of air travel. That would be a very hard sell for most people, but airship technology may provide a means to do just that.

Airships fell out of public favor after the tragic demise of the Hindenburg in 1937, having seen only limited recreational use in recent decades such as the ever-present Goodyear BlimpÂ  floating silently over sporting events. Airship technology has improved greatly since 1937 however, and modern eco-friendly airships could replace fixed-wing aircraft for hauling cargo and passengers within a decade.

In a report by UK’s The Guardian, former chief scientific adviser Professor Sir David King stated that “massive helium balloons – or blimps – would replace aircraft as a key part of the global trade network as a way of cutting global warming emissions.” King says that “as a result, the helium-powered ships could be carrying freight – and even passengers – in as little as a decade’s time.”

Although airships are much slower than jets, traveling atÂ  an average top speed of 125kph (78mph), they have much lower fuel costs and a carrying capacity much higher than a standard Boeing 747 jet. This lower speed and reduced fuel requirement has some people speculating that carbon emissions for air freight could be reduced by up to 90%. Airship technology, combined with increased use of clean fueled high speed rail networks, could rein in our carbon footprint to well within the guidelines set forth by Monbiot.

Although I don’t see high speed fixed-wing passenger aircraft becoming obsolete, I do see them as moving into more of a specialty realm, more like a luxury than the standard for long-distance travel. For the average person, airship travel may become a vacation in itself, with the possibility of luxury airships floating like cruise ships silently through the sky.