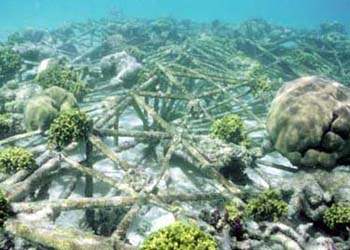 Global coral reefs are dying at an alarming rate; the Global Coral Reef Monitoring Network estimates that more than a quarter of the worldâ€™s reefs have died in the past few decades and that at least another quarter will die within twenty years. However, a new technology called Biorock may hold the key to saving the coral reefs of the planet from extinction.

There are several causes of coral death including physical damage from fishing nets, ocean pollution, and rising levels of dissolved carbon dioxide, but the greatest threat is the increasing temperatures of the worldâ€™s oceans. As water temperatures rise, algae living on the coral surface die and leave the bare calcium carbonate substrate exposed. This is commonly known as coral bleaching, and usually means the death of the coral. This coral bleaching is becoming more frequent, with mass bleachings killing most of the corals in the Indian Ocean in 1998 and again in the South Pacific in 2002.

Attempting to slow this damage to the worldâ€™s coral, artificial reefs have been built since the 1950s out of materials ranging from concrete blocks to discarded tires. However, most of these plans have failed to provide a new coral habitat, and one such artificial reef off the shore of Fort Lauderdale has become a complete environmental disaster. There have been some successes with artificial reefs, but most remain relatively barren compared with natural reefs. The one notable exception is the work of marine biologist Thomas Goreau and engineer and architect Wolf Hilbertz, who have been experimenting with a new type of artificial reef for over a decade.

The technology, elegant in itâ€™s simplicity, is called Biorock. It arose from experiments in the 1970s when Hilbertz was studying how seashells and reefs grow, by passing electrical currents through sea water. What he found was that as the sea water electrolyses, calcium carbonate slowly forms around the cathode, eventually coating the electrode with a material as strong as concrete. Later experiments showed that the coatings could be grown at up to a thickness of 5cm per year. As long as the power is flowing, the structure would continue to get larger and stronger as time passed. It can also heal itself if damaged, something ordinary concrete canâ€™t do.

Hilbertzâ€™s original plan was to use this technology to grow low-cost structures in the ocean for developing countries, however his focus shifted to coral reefs after meeting a marine biologist. Because the Biorock process uses such simple materials, electrode forms can be constructed in a variety of shapes to mimic natural reefs. Because the calcium carbonate coating that forms is so similar to natural reef substrate, corals take to the Biorock reefs very readily. In fact, other experiments were conducted to see if the electrical current was harming the coral at all and the results were surprising; the coral actually thrived on the electrified reef.

Based on these results, itâ€™s believed that the corals on Biorock reefs are more resistant to environmental threats than natural systems. Because of the electrical accretion of calcium carbonate to the reef, the corals are able to divert more energy to growth and reproduction instead of protection. Coral growing on Biorock reefs are able to grow up to 3 or 4 times faster than natural corals, giving them the ability to survive environmental disasters such as the mass bleaching of 1998.

The Biorock reefs can be constructed in any shape or size, but most built so far have been dome-shaped and about 12 meters in diameter. The amount of electricity each Biorock reef requires is low, drawing less than 3 watts per square meter. So far most reefs have obtained their power from solar panels but other possible sources of power are underwater turbines, wave generators or OTEC platforms.

While the research is currently focused on preserving and restoring the planetâ€™s ailing coral reefs, thereâ€™s a possibility that one day Hilbertzâ€™s original dream will be realized and floating islands will be created using this remarkable technology.