Book Review: A World Without Ice 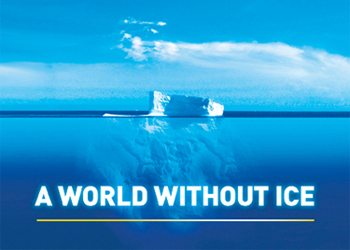 The Earth is warming at an alarming rate, and one of the principal dangers associated with global warming is the loss of multi-year ice in the polar regions. Climate change expert Dr. Henry Pollackâ€™s book, A World Without Ice, presents a clear picture of what the loss of polar ice will mean for our planet and just how different life on Earth will be without it.

â€œOf the sunshine falling onto Earth, about 30 percent is reflected back into space, mostly by white clouds in the atmosphere and white ice at the surface. The polar ice caps, covering virtually all of Antarctica, the Arctic Ocean, and Greenland, make up less than one tenth of Earthâ€™s surface, but account for much of the sunshine reflected from the surface. Polar ice also generates huge wind streams that spill ferociously off the ice caps and flow far beyond the ice perimeter to shape weather systems that influence the entire globe.â€

A World Without Ice examines the polar ice caps through geological history, from times of extremely warm global temperatures, to ice ages so severe that much of the surface may have been completely frozen over, to the temperate comfort weâ€™ve experienced over the past 10,000 years. Historical warming and cooling trends are explored, using data gathered from geological records and ice core samples, and not only does the data confirm that weâ€™re changing the climate faster than it has ever been changed before; it also reveals whatâ€™s in store for the Earth at the end of this path weâ€™ve created for ourselves.

With current warming trends, weâ€™re on track for a global temperature rise of up to 6Â°C, and this will have catastrophic effects for the planet based on our current way of life. From the loss of meltwater that many countries rely on for drinking and irrigation, to the coming rise in sea level which will force upwards of 400 million people to relocate, to the changing of global weather patterns, a comprehensive picture is portrayed of just how much we rely on ice.

Brilliantly written, A World Without Ice paints an alarming yet realistic picture of the next few decades unless immediate drastic action is taken to curtail emissions and reduce atmospheric CO2 concentrations. Dr. Pollack presents clear and concise data about our planetâ€™s temperature through geological history, and answers many of the climate skeptics who are often unscientific (yet still opinionated) and claim that rising levels of CO2 and a warmer Earth would be a good thing. The numbers simply donâ€™t work; the loss of polar ice will have very harsh consequences for our planet as we know it, and weâ€™re simply not prepared for what will be the greatest challenge our civilization has ever faced.

Dr. Pollack offers some solutions for mitigating the worst of the effects from climate change, discussing reducing carbon emissions, sustainable energy, as well as carbon capture and geoengineering schemes. He also touches on the controversial issue of population control just long enough to acknowledge that itâ€™s an issue not many people want to deal with.

Overall, this is an extremely well-researched book; clearly written so both scientific and non-scientific readers can fully understand the concepts and data presented. If youâ€™re at all concerned about the major changes weâ€™ll be facing in the coming decades, read A World Without Ice. Itâ€™s sobering, thought provoking, a little scary, and very important.

â€œNatureâ€™s best thermometer, perhaps its most sensitive and unambiguous indicator of climate change, is ice. When ice gets sufficiently warm, it melts. Ice asks no questions, presents no arguments, reads no newspapers, listens to no debates. It is not burdened by ideology and carries no political baggage as it crosses the threshold from solid to liquid. It just melts.â€

Henry Pollack, Ph. D., and his colleagues on the Intergovernmental Panel on Climate Change shared the 2007 Nobel Peace Prize with former Vice President Al Gore. Pollack, who has been a professor of geophysics at the University of Michigan for more than forty years, travels regularly to Antarctica and has conducted scientific research on all seven continents. He now services as a science advisor to Goreâ€™s Climate Project. Also the author of Uncertain Scienceâ€¦ Uncertain World, Pollack lives in Ann Arbor.