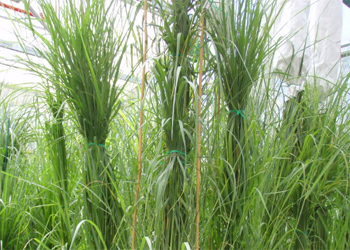 Air travel is one of the most energy, fuel, and carbon intensive activities that we engage in, and because of this, many people are wondering about the future of commercial flight. One of the options being looked at to save the aviation industry is biofuels, but are they enough to make our flight addiction sustainable?

During times when large numbers of commercial flights have been grounded, there are noticeable improvements in air quality, so the benefits of reducing airplane pollution, including their carbon dioxide emissions, is evident. However, we as a society have become accustomed to convenient air travel for both ourselves and our goods, and eliminating air travel is simply not an acceptable option to most people.

In addition to the other issues with biofuels, one of the chief concerns with biofuels in general, is the amount of arable land their production takes away from food crops. This is a very valid concern, as food shortages are already being made worse with both droughts and flooding in various parts of the world. Increasing deforestation and displacing food crop production in favor of growing biomass crops for fuels, is not a good idea but is being done all over the world, with the best of intentions of creating a green fuel.

A more sensible plan is to use only marginal land that cannot be easily used for agriculture. Permaculture practices have shown that even some of the most barren land can be turned productive, but there is plenty of land available that wouldn’t need extra work to produce biofuel crops. In 2009, Treehugger.com wrote an article titled “So How Much Agricultural Land Will We Need To Keep Global Aviation Aloft With Biofuels?“, and did some quick calculations based on total commercial flights in 2008.

The numbers were fairly promising, with the final conclusion being that 2.5% of the worlds agricultural land would need to be devoted to biofuel production just for airplanes to meet our current demands. This is based on several factors:

Any of these factors can be changed and it will affect the estimate of land requirements; in fact as production of algae-based fuel becomes more commonplace, it will likely require less agricultural land as it will be more resource efficient to grow the algae offshore. In addition, the next generation of aircraft that are being developed are vastly more efficient, with some designed to consume 70% less fuel than current generation vehicles.

With these in mind, here are my predictions for the future of aviation.

While biofuels can potentially fuel our aviation industry with only a small portion of our available agricultural land, this does come at a price. It also fails to address the issue that while biofuels can be carbon-neutral, they often are not, due to how they’re produced, and also that there is pollution generated when biofuels are burned. Ultimately the solution is somewhere in between more fuel-efficient and clean burning engine technology, and a reduction in use of air travel. Because it’s so hard to deny the convenience of air travel, I believe the push will be leaning more towards the clean technology side than reduction of use, but both will likely happen.

I think the aviation industry is here to stay, but it definitely has some turbulence ahead on it’s path to sustainability.