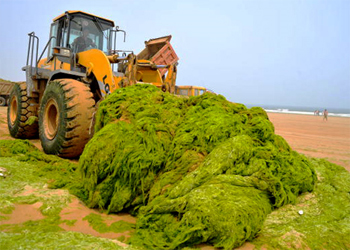 The bloom is a result of result of rising ocean temperatures and excess nitrogen in the water caused by industrial runoff, and can have devastating effects on local ecosystems if left unchecked. As the algae decomposes, it can strip oxygen from the water, suffocating local wildlife, and also releases noxious gases.

More than 4,000 tons of algae has been removed so far, but there is much more yet to remove. A similar bloom in the area in 2008 resulted in a staggering 170,000 tons of algae. By removing the algae before it decomposes, it can be processed into useful products such as biofertilizer or animal feed.

Another option that I haven’t seen presented yet, is to dry the algae to use as feedstock in making biochar. If the 2010 bloom ends up being anywhere close to the 2008 one, that is potentially a lot of biochar.