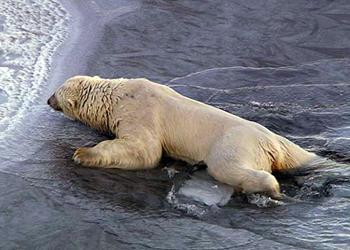 Weâ€™re changing the climate at a rate never before seen, and that rate itself is increasing at an alarming pace. Recent studies are now forecasting a global average temperature rise of up to 4Â°C, a rise in sea levels of several meters, and the extinction of up to half of the animal species on the planet. This is the biggest threat our planet has ever faced.

The Canary is Dead

In the past, miners would carry canaries into coal mines to act as an early warning system for a buildup of toxic gas; when the canary started to show signs of ill health or died suddenly it meant the miners had to get out quickly. The arctic ecosystems are our global canary, and weâ€™ve been ignoring their peril for over 50 years. Well, the canary is dead, and despite the valiant protests of a growing group of humans, the majority of us are still marching further into the mineshaft.

Weâ€™ve passed the tipping point; itâ€™s looking like weâ€™ll lose at least the northern polar cap. Besides causing the extinction of wild polar bears and other northern animals, this will have disastrous effects for the entire planet. The oceanâ€™s temperatures are regulated by an internal flow that carries hot tropical waters north to be cooled by the polar ice caps, and then back down again. This is the action that causes much of our weather, and keeps northern landmasses such as Europe and Canada habitable. With the loss of the northern polar ice cap, life in these locations will become a lot less comfortable. Our energy needs will increase, our food and water resources will dwindle, and we have virtually no large scale plans in place to deal with these issues. A comprehensive climate treaty is desperately needed, in order to regulate and dramatically reduce our co2 emissions, and then begin removing excess co2 from the atmosphere to bring global levels down to an ideal level of 350ppm, the level it was at prior to the industrial revolution.

Reaching a collective agreement at the Copenhagen summit is absolutely essential to the survival of our species and the planet as we know it. There is precedent for success with this type of global agreement; the Montreal Protocol was instrumental to eliminating the widespread use of ozone-depleting ChloroFluoroCarbons (CFCs). The world economy didnâ€™t collapse when we stopped using CFCs, and over time research has proven that the hole in the ozone layer has stopped expanding and has begun to repair itself. We can do the same thing with carbon dioxide, IF we can all reach an agreement about what needs to be done.

“Never doubt that a small group of committed individuals can change the world; in fact, it is the only thing that ever has“.

But What Can I Do?

Many world leaders are becoming aware of the severity of the climate change problem, and the growing public demand that our leaders take action. You can help accelerate this action by letting your leaders know that they must take action. You can help by spreading the word about climate change to people you know, especially those who remain skeptical of itâ€™s existence or believe itâ€™s a problem for future generations. If each person did just a tiny bit to reduce their environmental impact, we CAN minimize the impact.

This is just the beginning, when practices such as green building become the standard instead of the exception, we have a very real chance of making climate change a thing of the past. The important thing is that we TAKE ACTION NOW, because tomorrow it could be too late.