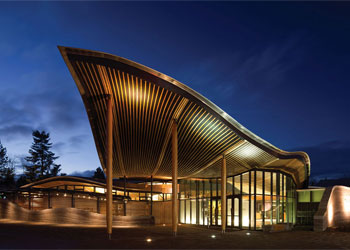 The Living Building Challenge, created in 2006 by Cascadia Green Building Council founder Jason F. Mclennan, is the first building standard designed to go beyond simple reduction of environmental impact and take a restorative approach with the intent of creating zero impact and actively providing a net benefit to the surrounding area.

Rather than using credits or points like the familiar LEED rating system, the Living Building Challenge has twenty Imperatives, all of which must be met to achieve certification. To date, only a handful of projects worldwide have met the criteria, including one which achieved partial certification here in my home city of Victoria. Eco-Sense, a code-approved cob house completed in 2008, was started before the Living Building Challenge was first released and was adapted to fit the challenge and amazingly managed to meet more than 75% of the requirements. Since then, several more projects in British Columbia have aimed for Living Building status, including the VanDusen Botanical Gardens project in Vancouver, and the Okanagan College Jim Pattison Centre of Excellence in Penticton.

The 2012 Living Building Symposium is being held on May 31st at the Victoria Conference Centre, tickets are $55, and $30 for Cascadia members & students.