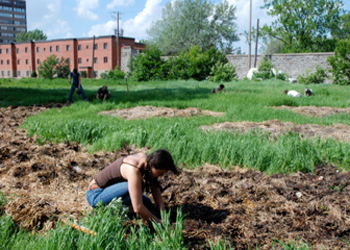 Food security is a critically important topic, as food is one of the very few things we need to survive. Sadly, for many people, food security is something they can only dream about. This issue is not limited to far away developing countries; serious food security issues exist right here in North America for a large number of people, and it’s getting worse every year.

Today is Blog Action Day, and since it coincides with World Food Day, this year’s topic is of course food. While there are many environmental issues that pertain to food, none present as pressing a need to address as food security.

I’ve titled this article ‘Creating hunger-proof cities’ because there is a disturbing disconnect between people and food in many cities. In almost every large city in North America, there are people at risk of starving every day, and even more who don’t have any access to quality food. In most major inner cities there exists what has been termed ‘food deserts’; regions that are devoid of grocery stores or other food markets. In these areas, people are routinely malnourished, and often must travel great distances to reach the nearest food source. While these areas generally coincide with poor areas, this is not always the case. This problem is often just as prevalent in suburbia; although residents of these areas generally just hop in their SUV and drive to the nearest Walmart superstore, even if it’s 20km away.. but I digress.

Driving long distance for food just isn’t an option for many people, so they go without proper food. As anyone who has even made a cursory study of health & nutrition can tell you, a diet based on synthetic & processed foods is an excellent way to ruin one’s health. This ‘food’ will keep a person alive, of course, but there are far better ways to feed people.

Additionally, there is also the problem of people who cannot afford even low-quality food. Anyone who has spent any time in cities has no doubt seen people begging on the street, or even looking in a trash can for something to eat. It’s hard to imagine this happening in locations with so much wealth (ever think about how much a city is worth?) and with so much waste, but it happens. This is a problem.

Food security for the general population is also a concern; I will use my own home as an example for this one. Vancouver Island, on Canada’s west coast, is home to around 750,000 people. Historically, up to 85% of the food consumed here has been produced here, but now that figure is below 10%. Experts estimate that we have roughly a 3 day supply of food at any given time, if the ferry service to the island is disrupted for any reason. Vancouver Island, specifically Victoria, is an affluent region. It has, in general, the highest cost of living anywhere in Canada. I routinely see Porsches, Ferraris, and other luxury vehicles here. Yet, we’re fundamentally just as food insecure as the person who doesn’t know where their next meal will come from. This is a problem.

Quality of food is also a concern; and this issue involves both how an item was grown, as well as where. It’s very common to see apples from New Zealand in the stores, grapes from Chile, and even more things from even further away. The average North American food item travels 2,400km (1,500 miles), which has a large carbon footprint. This results in lower quality food, as it is usually picked before it’s ripe, and usually as part of an industrial monocrop which makes it susceptible enough to disease that large quantities of pesticides & herbicides are used. One frequently quoted anecdote is that a person would need to eat 10 tomatoes today to get the same nutrition that 1 had in 1940. We’re eating food (and getting fatter), but are still malnourished. This is a problem.

Quality and availability of farmland is decreasing at an alarming rate. Most of the best farmland in Canada is covered by cities and suburbs, and the remaining quality land becomes less fertile with each passing year due to our unsustainable farming practices. Crop land in California is becoming increasingly salty, and droughts are very common throughout the country. Rising temperatures and altered weather patterns due to climate change are all contributing to a reduced ability to farm, which lowers yields and threatens global food supplies. This is evident with recent changes in the prices & supplies of staple crops such as wheat and rice. In addition, many low-lying areas that currently produce an abundance of food in Asia are at risk of being flooded by rising sea levels over the coming decades. The window in which we can comfortably grow the food we want, when and where we want, is closing rapidly. It is harder to grow large quantities of food now than it used to be, yet there are many more of us to feed now. This is a problem.

100 years ago, much of our economy was still based on agriculture. Many small farms existed, nearly everybody had a garden, and because chemical fertilizers & pesticides hadn’t been invented yet, it was also 100% organic. Food security was as simple as going out to the garden, or to the market. This is a trend that persisted for decades; many people grew ‘Victory Gardens’ during WW2, because so much food and other resources were being sent overseas. After WW2, however, things changed.

The 1950s and 60s introduced society to the concept of pre-packaged food and the great disconnect between people and the origins of their food, which started us on the path toward our current situation where a Twinkie is considered ‘food’, industrial farms so large that the farmers need satellites to navigate their tractors, and where people starve in cities mere feet from edible food locked securely away to rot in a dumpster. All of these problems can be reduced or eliminated if people were to remember one simple concept. If you put a seed in some soil, and add a little water, food happens! It’s not some mysterious concept, we used to do it all the time. We’ve just forgotten how incredibly simple it is.

Coming back to the title of this post, ‘Creating hunger-proof cities’, what can we realistically do to fix these problems? The simplest way to look at this issue is that the food is too far from the people. This creates the problems of lack of availability, lack of quality, lack of nutrition, and tremendous waste due to spoilage. Since most people live in large towns or cities, and those aren’t going away any time soon, the solution is to bring the food production back to where the people are. Fortunately, this is actually far simpler than it sounds.

Although this post was created as my contribution to Blog Action Day 2011, this is not the end of the story. Over the coming weeks, solutions for these problems will be outlined in more detail. We’ll be looking at techniques & ideas for urban food production, composting, community supported agriculture, aquaculture & aquaponics, and vertical farming. We’ll be looking at the social justice aspects of food, and exploring possible solutions to provide food for everyone in need. We’ll also explore the economic case for urban farming, and help to redefine what it means to be a farmer in the 21st century. Together, we can bring real food back to the people, and create truly hunger-proof cities.