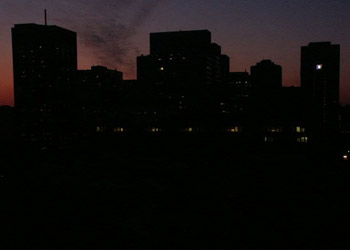 When electrical systems or power grids become overloaded, blackouts can occur. A blackout, or power outage, poses a great inconvenience to those affected — especially businesses. An electricity shortage not only leaves a business without power, it can also prevent a business from operating altogether. After all, without power, manufacturers can’t function, restaurants can’t serve food, grocers lose perishables and offices are forced to close and may lose important data at the time of power loss.

Just this past March, for example, Boston, Massachusetts businesses were hit hard by a blackout. The Boston blackout left more than 21,000 people without power in the city, forcing many businesses to shut their doors. The massive power outage was caused by a 115,000 volt electrical transformer that unexpectedly caught fire. Main lines of transportation were forced closed, businesses shut down and the local economy took a temporary hit.

Electrical fires aren’t the only cause of blackouts. In fact, anything that causes a short circuit, electrical main overload or damaged power line can cause a power outage. These are often caused by environmental conditions or inclement weather, such as high winds, lightening or fallen trees. Even severe droughts and excessive heat can be a cause for controlled power outages in what is known as a ‘rolling blackout.’ During a rolling blackout, specific sections of a power grid are shut off temporarily to conserve energy and prevent circuit overload.

Businesses in some states are at a greater risk for experiencing rolling blackouts than others. For example, the Electrical Reliability Council of Texas admonishes business owners and residents at the beginning of nearly every summer against over-the-top energy and water usage during times of peak demand. Water shortages make it more difficult to cool power plants as they become overheated due to high energy demands. Furthermore, Texas is notorious for its hot and dry summers that can easily place strain on the state’s power grid.

Preparing Your Business for a Power Outage

So what can you do if you’re a business owner? Whether you’re at an increased risk for a power outage or not, you should have a plan of action in place to help minimize the effects of a blackout. In fact, being prepared for a massive blackout could even place your business at an advantage over competitors who are under-prepared. This is especially true if you carry inventories. If your business has access to power, you can continue to conduct business transactions, which could earn you more customers. Even if you only have access to a limited power supply, at the very least you can prevent losses and maintain a normal level of security for your property.

One of the most efficient ways of preparing for a power outage is investing in power supplies such as an electrical generator. Commercial generators can sustain a sufficient amount of power to a business until electricity is restored. Many business owners, manufacturers and factories actually consider power generators to be an investment in their businesses. Furthermore, with advancements in commercial generator technology, generators are more affordable and effective than they ever have been before. Most are automatic, turning on within seconds when incoming electrical voltage is turned off or lowered.

Another way of protecting your business long-term is by reducing your dependence on traditional energy sources altogether. As demand for energy continues to increase, more and more business owners and warehouses are investing in solar energy panels as a way to power their businesses. Solar panels are also useful as independent temporary power sources during blackouts. A small solar generator can power a laptop or other small device for several hours if necessary.

Businesses must prepare for power outages in advance. After all, for many business owners, being without power can mean thousands of dollars in lost revenue, not to mention security system failure and other associated problems. Don’t get left in the dark. By taking time to protect your business, you may not only save money, you might even be able to thrive during a blackout.

This is a guest post by Jessica Stark from Eat Breathe Blog. Jessica is interested in social media and environmental issues. She also enjoys learning about technology and loves spending time outdoors.