Enviropigs: A controversial solution for a nonexistent problem 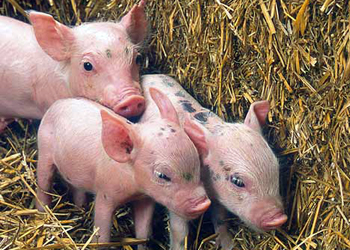 Last year Canada approved limited usage of a genetically altered breed of pig which has been termed the “Enviropig”. These animals have been genetically modified to excrete less phosphorous in their waste, in order to reduce water pollution due to runoff.

Phosphorous is a critical element to all fertilizers (it’s the P in NPK), and when applied with other nutrients to soil it can boost plant growth. Unfortunately, the same thing also happens when phosphorous gets into bodies of water. One common side effect of large scale industrial farming is runoff; excess liquid that drains into ditches, streams, rivers, and other bodies of water from a farm site. This liquid is very high in nutrients from animal waste or excessive fertilizer use, and results in eutrophication (nutrient enrichment) of the receiving body of water. This causes an algae bloom, which deprives the rest of the local ecosystem of vital oxygen and other nutrients. It makes the water green and often foul smelling, and also causes large scale fish deaths if they are unable to escape to another area.

On the surface, pigs that release less of the element that causes these harmful blooms seems like a good idea, but it’s just another case of an overly complicated solution for a problem that doesn’t need to exist in the first place. The runoff problem only happens when farms are doing something wrong, specifically, not containing and treating their animal waste. Part of this is likely due to accidental spills, but many other farms, especially large industrial scale ones with thousands of pigs, do not even bother to treat the waste.

Smaller scale pig farms are able to plow the manure into their fields where the it enriches the soil, and thus don’t produce runoff in the first place. Some other farms, even larger ones, have treatment systems on-site, many of which include methane digesters to generate electricity with biogas turbines. Both of these are excellent solutions to the problems resulting from large quantities of animal waste, and both are far better than genetically altering pig DNA.

The Enviropig is a very controversial issue, and for good reason. It is being presented as a panacea for industrial pig farming runoff, when in reality it is nothing more than greenwashing, designed to allow large scale pig farms to continue polluting without actually dealing with the problem. There are vastly better solutions to this problem, nearly all of which have secondary benefits to the farmer. The remaining solution? Don’t have a pig farms so big that you can’t handle the amount of excrement it produces. Simple as that.

Genetic alteration is a fascinating technology, but it should be approached with extreme caution and should definitely not be used as a solution to human laziness.