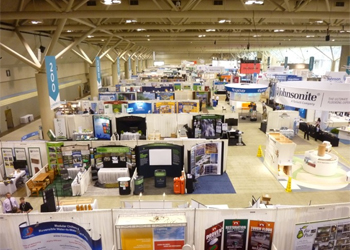 With hundreds of vendors, spread across multiple buildings, as well as dozens of lectures to choose from, Greenbuild 2011 was a big place. In the first part of this series about my experience at Greenbuild 2011, I looked at the trip as a whole; in this post I’m going to touch on some of my favorite new products encountered at the trade show.

The question ‘What’s Next?’ was the main theme at the conference this year, and it was incredibly apt. As I endeavored to visit each of the trade show booths in my spare time between lectures, that became my mantra as well. With so many innovative products to see, and people to talk to, it became a mix of strategic conversations and very rapid walking!

As I walked around the trade show floor, it became apparent to me that there have been some significant advances in the field of lighting. One of the projects I worked on in 2010 achieved a 95% reduction in energy for lighting in the simulations, and I was pleasantly surprised to see what was considered ‘out there’ thinking just last year is now approaching commercial mainstream acceptance.

On the artificial lighting side of things, I had the opportunity to talk with representatives from 2 of my favorite companies, Lutron and Philips. Lutron’s intelligent lighting control systems make it possible to design a lighting solution that barely sips energy by minimizing the time lighting is actually needed, through usage of their occupancy sensors, photocell sensors, and timers to determine how much lighting is needed at any given time, depending on time of day. When combined with the innovative LED light bulbs from Philips, which emit a beautiful warm glow instead of a harsh white light, they can recreate the look and feel of incandescent lights that respond to your need as if by magic, at a fraction of the energy consumption. CFLs have been a good replacement during the phase-out of incandescent bulbs, but they are merely a bridge technology. The future is here, and it is intelligently-controlled LEDs.

On the other side, there were some truly remarkable products demonstrated for natural lighting. The one single company that I was extremely pleased to see there was Parans. Their sun tracking fiber optic light is one of the most innovative products I’ve seen in years, and although I’ve recommended it for several products, it has never been possible due to lack of availability here in Canada. Thanks to a group based out of Edmonton, however, these remarkable products are soon coming to the Canadian market. The ability of the Parans units to bring sunlight deep into a building with fiber optics is a game changer for schools, hospitals, and other buildings that could benefit from sunlight in areas not adjacent to windows or a roof for a skylight.

One of the main issues with large amounts of glass for daylighting is that glass also lets tremendous amounts of heat in and out, due to its poor insulating qualities. Even traditional expensive double and triple glazed windows still pale in comparison to the surrounding walls, which could be 4-5 times as insulating as the windows themselves. Enter Southwall, who is one of the companies pioneering windows that are as insulating as most walls. I’ve been familiar with Southwall’s Heat Mirror technology for several years, but it was very exciting to be able to see a demonstration of its ability to noticeably block heat from a heat lamp. They are producing a quad glazed window with their proprietary Heat Mirror film that has an astoundingly low U value that equates to R-20. Most window glass is roughly R-1, so that gives an idea of how much more efficient the Southwall glass is. A similar product to the Heat Mirror film is Solargard, which also had a very impressive demonstration involving a sliding glass panel covering a heat lamp, and a thermometer to quantify the temperature difference. As products like these become more common, it will be a real game changer for energy consumption in buildings.

Another interesting solution that was demonstrated for reducing incoming light to a building was the world-famous electrochromic glass developer, Sage Glass. I’ve covered Sage Glass before, but it was something else entirely to use their Kinect-powered demonstration to change the glass with the wave of a hand. Able to go from fully transparent to a dark tint in a matter of seconds, this technology is very exciting from both energy management and privacy standpoints. The glass requires standard 110v power to change, but then drops down to a tiny draw to maintain the tint level. The glass can be adjusted manually, or by a lighting controller such as from Lutron.

I’ve saved what I feel is the best, or at least the most innovative, for last. Aerogel insulation is a product that’s been something of a mystery for many years, but it is now available for commercial use. First developed decades ago, aerogel remains a very futuristic material. Over 95% air by volume, it has both tremendous insulating properties and light transmission. This makes it ideally suited for creating frosted skylight panels that insulate better than most conventional roofs. I had the pleasure of chatting with a gentleman from Cabot, the company that produces the Lumira aerogel insulation. Since the aerogel comes in a very fragile granular form, rather than selling it as a product directly, they provide it as a material to other companies who integrate it with their existing products. One such example is Tensotherm roofing, which creates large span translucent roofing structures that include aerogel to give them superior insulating properties, while letting daylight through in a pleasant diffuse glow. Because the aerogel granules can be put into any sort of container, there is no limit to the thickness of roofing panels that can be created. The extreme light weight does not pose the same limitations on roof panel spans than normal insulation would, so it could be possible to create a skylight with a surface area of several thousand feet, covering a large atrium of a school, mall, etc to let daylight stream in, and yet had an insulating value of R-60 or higher to keep heat in during the winter, and out during the summer.

By combining the technologies mentioned above, it will be possible to make glazed surfaces that perform at a level that we can barely comprehend yet. he future of lighting is very bright indeed!