How to get started with vermiculture 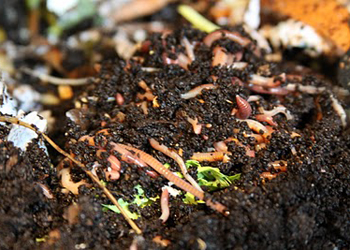 If you live in an apartment or other small space and want to compost your own kitchen scraps, don’t despair over your lack of outdoor space for a traditional composter. There are a few options available, but one of the best and cheapest is called vermiculture. Here’s how to get started.

What is vermiculture?? If the photo above wasn’t enough of a hint, then the name should help out a bit. Vermiculture is from the root word vermis, which is Latin for worm. Thus, vermiculture is the raising and production of earthworms for both the worms themselves and their byproducts. In this case they’re doing double duty, because they not only eliminate kitchen scraps, they also produce a very nutrient rich fertilizer for next year’s plants.

The worms eat through your kitchen scraps and leave droppings behind, called castings. These are very high in beneficial microorganisms and nutrients, which nourish your plants when this compost is finished and used. The other byproduct is liquid waste, which is called ‘worm tea’. This isn’t the kind of tea that you would drink, but your plants will love it.

There are a couple of ways to get started with vermiculture, one is to buy a system that is ready to use, the other is to build the composter yourself.

If you’re looking to buy a ready-made system, the Worm Factory is probably your best bet. It comes with 3 trays (expandable up to 7) for handling whatever volume of kitchen scraps you need to compost, is made with post-consumer recycled plastic, has a spigot to drain the valuable worm tea for use on your potted plants, and has a fairly small footprint at just 16″ x 16″, allowing it to easily fit into any corner of your kitchen, laundry room, etc.

If, on the other hand, you’d like to try your hand at building your own vermicomposter, you’re in luck because it’s probably easier than you thought. Simple living blog Homestead Revival has an excellent tutorial on how to build your own vermicomposter with common household items such as plastic storage bins, window screen, and bricks. It takes up some more space, doesn’t have an easy collection system, and definitely looks more DIY, but the cost is hard to beat.

A vermicomposter is the perfect companion to balcony or windowsill container gardening, and can allow even small home or apartment dwellers to recycle their kitchen waste and use it to grow even more food. For more detailed information on vermiculture, how to set up your own vermicomposter and keep your worms happy and productive, I also recommend the book Worms Eat My Garbage: How to Set Up and Maintain a Worm Composting System.

Worm Factory vermicomposter, get red wiggler worms online, and Getting started with vermiculture at Homestead Revival