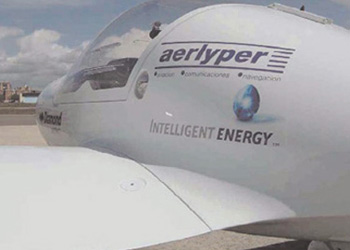 Air travel is one of the most carbon-intensive activities an ordinary person can do, but Boeing is looking to change this by developing a light aircraft that is powered by hydrogen fuel cells. They hope to have their first test flight within 12 months, potentially making it the greenest plane to ever fly.

The aircraft chosen for the project is the Diamond Dimona, an Austrian (edit: fixed mistake) 2 seater plane selected for it’s light weight. The fuel tank has been replaced with a hydrogen storage tank, which feeds hydrogen into the fuel cell. The hydrogen reacts with atmospheric oxygen to power the electric propeller. The problem Boeing encountered was the required energy output to get a plane off the ground and keep it climbing under acceleration, this was addressed by installing battery storage to assist the fuel cell output during takeoff. These batteries would be recharged during flight. The estimated speed of this experimental flight would be a mere 70 miles per hour, far below the speed regular aircraft fly at. This is due to the limited output of the fuel cell, as well as it’s size and weight. It’s possible one day we’ll be able to ride in a fuel cell powered passenger jet, but this is is likely many years away. In the near future we’re likely to see biofuel-based aircraft fuel, as well as possibly the new Virgin Fuel being developed by Richard Branson.

Another application for fuel cell aircraft is being developed at Georgia Tech, who is experimenting with hydrogen fueled Unmanned Aerial Vehicles (UAVs). The Georgia Tech project is testing a UAV with a 22 foot wingspan, that’s powered by a hydrogen fuel cell producing 500 watts. The applications being looked at with the Georgia Tech UAV include low cost alternatives to satellites, tracking hurricanes, border patrols and general reconnaissance. Environmental monitoring is also a possible application for this technology, and a more speculative idea is using UAVs to help mitigate pollution. Previously I posted about a new type of paint that can absorb pollution, it could be possible to create fleets of tiny of UAVs coated with this substance which fly around cities like birds, slowly helping to clean the air.

Fuel cell powered UAVs have several advantages over conventional UAVs, noted Tom Bradley, a doctoral student in Georgia Techâ€™s School of Mechanical Engineering who developed the fuel cell propulsion system. For starters, fuel cells emit no pollution and unlike conventional UAVs, donâ€™t require separate generators to produce electricity for operating electronic components. â€œAnother plus, because fuel cells operate at near ambient temperatures, UAVs emit less of a heat signature and would be stealthier than conventionally powered UAVs,â€ he said.

It might also be possible to integrate solar cells into the wing surfaces of these UAVs, allowing them to conserve fuel while flying in daylit areas. Carbon nanotubes and other nanotechnology-derived materials will likely be used to make the UAVs as light as possible, which will reduce their energy consumption and expand their range.

The main benefit of using hydrogen as a power source, is the lack of harmful emissions from the engines. I’m not in favor of hydrogen for ground vehicle use, but it may be a viable option for aircraft.