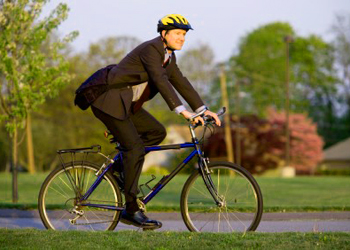 Most of us are well aware of the health and economic benefits of bicycle commuting, but in most cities the car is still king. Even in cities such as Victoria, which have ample bike lanes and paths, the majority of people still drive almost everywhere. Is fear of a serious bike injury the motivating factor?

Fatalities from bicycle injuries account for about 2% of all road-related deaths in Canada, nearly all due to vehicle collisions. 2007 data from Transport Canada reveals that while there were 65 fatalities, nearly 7,500 bicycle injuries were serious enough to require hospitalization, and it’s estimated that as many as Â 70,000 more required visits to the emergency room for non-life threatening injuries.Â In the United States, 698 people died from bicycle injuries in 2007, and more than half a million others required treatment in hospital emergency rooms.

Experts offer several reasons as to why there’s such a large difference in bike injury rates, including the availability ofÂ more bicycle-dedicated routes, and greater awareness of cyclists on roadways. More people riding bikes creates greater awareness by cyclists and car drivers which translates into lower bike accident rates.

In cases of a vehicle bicycle collision, it’s no surprise that the cyclist usually fares the worst. Certain safety precautions can be taken to reduce the chances of suffering a bicycle injury:

If it’s possible to take a dedicated bike path or side street, that’s almost always safer than taking a major road. It may take a bit longer to arrive at your destination, but the reduced risk of a serious biking accident is worth it.
Many people are still wary of bicycle commuting, despite tremendously successful campaigns such as Bike to Work Week and the increasing number of bike storage and shower facilities being offered in office buildings. Is fear of a bicycle accident keeping you from becoming an active cyclist?