More solar energy than we know what to do with 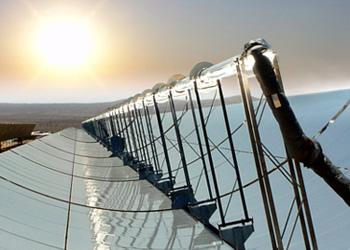 There is more solar energy received by the Earth each day than we can use. Photovoltaic technology is steadily improving and will soon reach the mass market when companies like Nanosolar begin to sell their cheap efficient thin film solar cells, however there’s a solar technology available now that relies on a different, more familiar, method of generating power: heat.

Concentrating Solar Power (CSP) uses reflectors including troughs, parabolic dishes and multiple flat mirrors, to focus and concentrate sunlight on a specific point to boil water. For power generation, this produces steam which is used to spin turbines which in turn drive electrical generators. The most complicated part of this system is the mirror tracking control, which slowly moves the reflectors or dish to keep it aimed directly at the sun; a relatively simple task. The heat from the excess steam can be used to desalinate water, something very useful if the solar facility was close enough to a body of salt water such as areas of North Africa.

Studies conducted by the German Aerospace Center have revealed that a solar generating facility covering just 0.3% of the area comprising the Middle East and North Africa could supply all of the energy required by European Union; an area just 4 times this could supply enough electricity to match the current consumption of the entire planet. This isn’t using advanced nanotech solar panels, although those will most definitely play an important role in distributed residential systems, rather it uses simple concentrating solar power systems consisting of glass tubes suspended above reflective troughs, feeding superheated water to a steam turbine. This would allow for the use of the existing power grid, existing appliances and fixtures, while also being completely non-toxic and pollution free.

Locating that much of the planetâ€™s power generation capacity in one place would make it very vulnerable to attacks, natural disasters and mechanical failures, a more sensible alternative is to have many smaller scale facilities located all over each inhabited continent, connected to each other the way our current system is set up.

CSP facilities could be set up anywhere there is a large stretch of desert that has high enough temperatures and incoming solar energy; in the USA the entire electrical needs of the country could be met by a solar thermal power system in the southwest that was no bigger than a few combined hundred square miles, spread across several states. Excess heat can be stored during the day to continue to power the steam turbines at night, as well as connections to other types of renewable power such as wind and geothermal. In the short term, biomass burned in coal plants could also be used, as this is still carbon-neutral, but in the long term non-combustion energy sources are the most clean and sustainable.

Concentrating solar power generation is efficient, simple, totally clean, sustainable and cheap. For a fraction of the cost of the new â€œclean coalâ€ and nuclear fission systems the USA plans to build, the electrical needs of the entire world could be met. This is only a small percentage of the worldâ€™s annual combined defense budgets, yet it has never been done. With a small up front investment that is far cheaper than nuclear or coal, we could have a power source that is clean, reliable and very cheap. This isnâ€™t a license to continue wasting energy, but rather would ideally be used in conjunction with conservation and energy savings technology to allow more of our infrastructure to be converted to solar electric such as electric vehicles and mass transit.

If a group like the Gates Foundation were to take on part of this project, a system could be set up in Northern Africa to provide power for the region as well as parts of Europe. This would not only provide clean power, but could also provide desalinated water and much needed money to help the region combat disease, hunger and help the people there develop a sustainable infrastructure for the future. The energy lobby in North America is very powerful and would likely oppose any such development here, but thatâ€™s no reason that other countries couldnâ€™t start now and set an example. When energy prices go sky high in the future, perhaps people living in North America will realize that there are far better options than the polluting coal and expensive nuclear that our governments seem to favor so much.