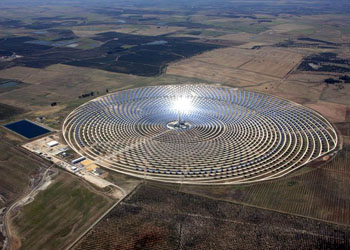 North Africa is one of the sunniest regions in the world. No wonder why solar power, and especially concentrated solar power (CSP) plants, have seen a tremendous growth in the last couple of years.

Morocco is confident that they will become a world-class solar energy producer in the near future.

“Our target is that in 2020, 42 percent of our power supply will come from renewable energy, including 14 percent from solar,” stated Deputy Energy Minister Mohammed Zniber at the 18th SolarPACES Conference in Marrakesh.

Unlike it’s neighbor countries, Morocco does not have rich reserves of fossil fuels. This is forcing the country to develop their renewable energy sector.

The country has a long way to go before it reaches the target of 14 percent of solar. At the time of writing, there is only a 20MW solar power installation in the country. On the other hand, a lot of new and upcoming projects have started to take shape.

The next big project will be located near the town of Ouarzazate. When finished, the massive CSP-plant covering 3,000 hectares will generate 500 MW of power â€“ by far the largest solar power plant in the world. For comparison, the capacity of today`s largest photovoltaic plant only has a capacity of 247 MW (Agua Caliente Solar Project, U.S.)

The CSP-plant near Ouarzazate is the first of many projects that are part of the DESERTEC-foundation, which promotes the development of renewable energy in Northern Africa, the Middle East and Europe.

With a surge in economical development in the country comes a hunger for more electrical power â€“ the current rate of energy consumption is rising by ten percent in Morocco.