New process to remove carbon dioxide from the air 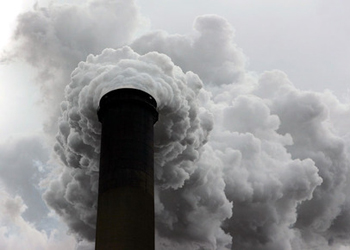 Most people are familiar with the concept of co2 scrubbers that capture carbon dioxide from smoke stacks of power plants and other industrial processes, now new research is being done on scrubbing carbon dioxide from ambient air, but how effective will it be?

Christopher Jones at the Georgia Institute of Technology in Atlanta is testing carbon capture materials that are based on amines, the same chemicals used to capture carbon from smokestack emissions, on co2 concentrations similar to those found in the atmosphere.

Unlike liquid amine solutions, the solid materials that Jones is using require 75% less energy, as they release their stored carbon dioxide at a temperature of 110Â° Celsius, allowing for easy reuse of the materials. This is possible thanks to a new type of material called hyperbranched aminosilica.

What this technology means, is that atmospheric carbon can be captured and then released in a controlled manner to grow biomass such as algae for biofuels, or better still, biochar, to safely sequester the carbon. So far a pilot plant has been tested that is able to capture 2 tons of atmospheric carbon dioxide per day, but it’s estimated that a commercial scale facility could capture up to to 1 million tons daily.

Before we start celebrating, however, it should be noted that even at 1 million tons per day, this is still a very tiny fraction of our daily carbon dioxide output, and that a large number of these facilities would need to be built to just keep pace with our current emissions, before they could even put a dent in the amount of carbon dioxide we’ve already put into the atmosphere. This is a fascinating breakthrough and will certainly hold a place in our climate change mitigation actions, but is by no means a silver bullet allowing us to keep polluting the atmosphere.

The costs associated with this plan dwarf the modest costs required for simple conservation and efficiency. Or, otherwise stated, the old adage of “an ounce of prevention is worth a pound of cure”, except in this case it’s very likely worth several thousand tons of cure.