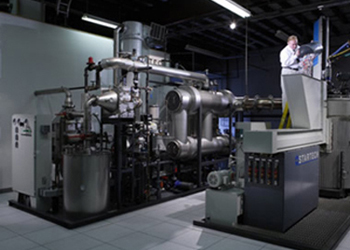 Mention trash incineration to most people and the image that usually springs to mind is a dirty, smelly practice that is about as far from â€˜greenâ€™ as you can get. However, this isnâ€™t the case with a technology called Plasma Gasification, which is not only very eco-friendly, itâ€™s also powered by the very garbage that it processes. It also produces clean energy and commercially useful byproducts.

While the technology of processing materials with plasma has been around for some time now, Joseph Longo, CEO and founder of Startech Environmental Corporation has developed a device that can handle pretty much any type of waste put into it and turn it into a clean source of energy.

Inside a sealed stainless steel vessel filled with ordinary air, high voltage is passed between two electrodes rips electrons from the air, converting the gas into plasma. The energy of the plasma arc is so powerful; it breaks down matter into itâ€™s component parts by stripping the valence electrons from the atoms, and tearing apart the molecular bonds.

This process creates two byproducts; one is a synthetic gas composed mostly of hydrogen and carbon monoxide which can be converted into a clean fuel. The second byproduct is a form of vitrified glass that can be used as inert fill for construction in roads, building blocks or other uses. Depending on the nature of the materials fed into the conversion unit, the glass may be suitable for creating tiles or countertops. Some scientists caution however that the glass would likely contain toxic heavy metals.

The process produces enough synthetic gas to power the unit, as well as a surplus which could be sold directly or used to generate excess electricity, providing an additional source of revenue for the facility.

This is an attractive option for many cities who are paying large fees to transport and store garbage; one of the StarTech units can handle about 2,000 tons of trash per day. Michael Nuzzi of US Energy says:

“New York City is already paying an astronomical $90 a ton to get rid of its trash. According to Startech, a few 2,000-ton-per-day plasma-gasification plants could do it for $36. Sell the syngas and surplus electricity, and youâ€™d actually net $15 a ton. Gasification is not just environmentally friendly, itâ€™s a good business decision.â€