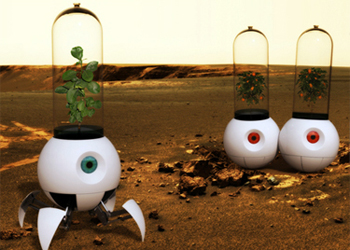 A finalist in the Electrolux Design Lab 2009 competition, Czech designer Martin Miklica has the future in mind with his robotic creation ‘Le Petit Prince’, a robot designed to nurture Earth plants on the surface of Mars.

Looking quite like something straight out of Star Wars, ‘Le Petit Prince’ (Little Prince) is a robot designed to seek out optimal conditions and nutrients on the surface of Mars, and then grow an Earth plant inside it’s protective dome. Swarming over the Martian landscape, each robot has the ability to communicate with the other robots and transfer information about movement, location, and other sensor data, allowing each one to learn and improve it’s actions based on input from every other unit.

With Earth’s biosphere deteriorating and the population swelling, more than a few people are looking to our red neighbor as a possible new home for Humanity. I’ve written about the concept of terraforming Mars before, but the idea of using a single robot to nurture each plant is quite unique. There are some pretty big obstacles to overcome if this idea is to work, primarily the sheer number of robots it would require to produce any measurable effect on the Martian atmosphere.

I believe a more realistic goal would be to have robots seek out nutrients and water and bring them to a central location, where a greenhouse structure was constructed. Long term, however, in order to truly change the Martian environment to be suitable for humans, the atmosphere must be thickened considerably and then have it’s composition changed completely, as well as a thick organic soil layer built so plants can grow on the surface, and not just in greenhouse domes.

With both current and forseeable technology it’s not feasible to move any more than a tiny fraction of the Earth’s population to another planet, so every effort should be made to fix the damage to our own planet, and look to Mars only as a next step in our exploration of space, not a replacement for Earth.