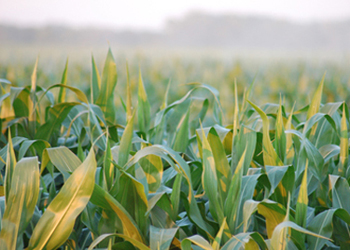 In a previous article, I wrote about the environmental costs of solar and wind power, in this article I’m going to look at a few of the issues surrounding another ‘green’ energy source: biofuels. Many people are aware of green fuels like biodiesel and ethanol, but just how ‘green’ are they?
Biofuel is any fuel that is derived from biomass – recently living organisms or their metabolic byproducts, such as sewage or manure. Like coal and petroleum, biomass is a form of stored solar energy. The energy of the sun is “captured” through the process of photosynthesis in growing plants. It’s a renewable energy resource, and under optimal conditions is very close to being carbon-neutral. When biomass decomposes aerobically, carbon dioxide is produced. Because this carbon dioxide was absorbed by the organism during it’s life cycle, it results in no net gain of atmospheric carbon dioxide. This is true for the combustion of biofuels as well, which is why they’re being looked at as a possible replacement for petroleum fuels.

There are 3 main examples of biofuel that are being looked at as energy sources: biodiesel, ethanol, and biomass.

If biodiesel is to be used in large quantities, feedstocks will need to be produced for the sole purpose of creating the fuel. The main crops that are currently used for biodiesel production are soy and canola (rapeseed), but these crops are both relatively inefficient; producing between 50-150 gallons per acre per year. The problem is there simply isnâ€™t enough farmland available to produce all the biodiesel required. To put this in perspective, if every one of the 434 million acres of American farmland was used just for soy cultivation for biodiesel, it would only meet 12 percent of their current demand! For biodiesel to be a viable option as a replacement for petroleum diesel, a far more efficient means of production must be developed. Research conducted with certain types of algae that have up to 50 percent oil content has concluded that sufficient biodiesel could be produced in a combined area of 28,000 square kilometers, roughly 0.3 percent of the land mass of the USA. Because algae production doesnâ€™t require soil, this process could be carried out in non-fertile areas such as desert areas, provided sufficient water was available. Other research is being conducted at MIT on technology developed by Massachusetts-based Green Fuel Technologies, which uses a bioreactor to grow algae fed with flue gas emissions from power plant smoke stacks. The process produces 40% less carbon dioxide and 86% less nitrous oxide than the original stack emissions, and the algae is harvested and processed into biodiesel. As an added benefit, the dried remainder can be reprocessed to create ethanol. There is a concern that this will encourage the continued use of coal, this technology is better suited to being a short term solution while fossil fuel systems are phased out. For more information on biodiesel, Canadian author Bill Kemp has written an excellent book called Biodiesel Basics and Beyond.

Ethanol is an alcohol fuel produced via fermentation and distillation of plant matter that contains carbohydrates (sugar). Ethanol is less toxic than methanol, but is still not suitable for human consumption or careless handling; a difference from biodiesel. Ethanol can be burned in a slightly modified gasoline engine, or used as a gasoline additive. The most common blends available are E10 and E85, which contain a 10 percent and 85 percent ethanol to gasoline mixture respectively. Some modifications may need to be made to vehicles if they are not â€˜flex-fuelâ€™ vehicles. From a consumer’s point of view, ethanol is distributed with the existing infrastructure, ie. from a gas station pump, but there’s another issue that’s preventing this from being an easy transition from gasoline. Ethanol in high concentrations is corrosive, and would weaken metal pipes and tanks. Due to this problem, an alternative method might be required to get the ethanol to the fuel stations. In an article by Ethanol News, one possible option was to use PVC pipes to transport the ethanol. This would be an environmental disaster due to the toxicity of PVC.

Because ethanol is produced from plant matter, itâ€™s considered a renewable fuel source, and also has the potential to be carbon-neutral. However, corn-grain based ethanol isnâ€™t as green as biodiesel due to the greater fertilizer and pesticide requirements for the corn crop. Corn-grain ethanol produces 25 percent more energy than is consumed in its creation, and produces only 12 percent fewer greenhouse gas emissions than gasoline.

As with biodiesel, there isnâ€™t enough crop land available to produce enough ethanol from conventional sources. If all of the United Stateâ€™s crops were put into ethanol production, it would meet only 10 percent of the current demands. Brazil makes extensive use of ethanol as a substitute for gasoline, using sugarcane as a feedstock. This is a much more efficient feedstock than corn, having an average cost of production (including farming, transportation and distribution) of $0.63 per US gallon. The downside to this practice is the cost of food has gone up, as more and more farmland is devoted to growing sugarcane. The fibrous residue of this process, bagasse, can be reprocessed into biodegradable bioplastic objects such as disposable plates and cutlery. Sugarcane isnâ€™t a viable option for colder climates, so other options need to be looked at. Recent advancements in cellulosic ethanol show much promise in converting non-food crops such as grass and agricultural waste into fuel. This has the benefit of using more widely available feedstocks, and not consuming food crops for fuel. For ethanol to be a suitable replacement for gasoline, sufficient feedstock crops must be grown without negatively impacting our food production.

“Montana farms produce 10 million tons of wheat and barley straw that are typically left in the field. An additional five million tons of hay are produced annually,” said Dave Wichman, superintendent of the Central Ag Research Center. “The advantage of using annual farm crops for ethanol production is that farmers can produce biomass with conventional crops and equipment, and can alternate crop production for energy, food or feed,” he added. In areas with irrigation and enough heat, a double-cropping system with winter cereals and warm season grasses like winter triticale and sweet sorghum, can be adopted.” The biomass production increases by as much as 50 percent using this system compared to a single-cropping system,” â€“ Link

The overall process must also have a sufficiently high energy surplus; currently corn-based ethanol does not, however cellulosic ethanol may change this. There are other issues surrounding this practice as well, such as the energy expended tending the crops and transporting the feedstock to a processing facility, which all reduce the efficiency of ethanol as an energy source.

Biomass refers to any plant matter that can be used as fuel, although in this article Iâ€™m focusing on dry biomass that can be burned as an energy source. This is the oldest and best known form of biomass fuel; humans have been burning wood and other dry plant matter since prehistoric times. Iâ€™ve written previously on Giant Miscanthus as a biomass source, other grasses and plants can be burned as well including bamboo, kenaf and hemp. In areas where the plant is creating a problem, invasive species like kudzu could also be harvested and burned. An excellent way to utilize these resources is to pelletize the biomass and burn it in a coal power generating station, with stack scrubbers and particulate filters in place. This could work well with the algae stack systems from Green Fuel Technologies to help close the carbon loop. Biomass of this type can also be fed into a digester, to produce a methane mixture called â€˜biogasâ€™, which can be burned directly or in a turbine to generate electricity.

Other advances in biomass energy generation have also been made in the area of microbial fuel cells, a technology that uses microorganisms to digest sugars from agricultural and municipal waste that produces electrons directly. Fed with corn waste, a prototype system built by researchers at Penn State University in the USA produced an average of 1 watt per square meter of surface area, at 0.5 volts. In test runs, 93 percent of the biochemical oxygen demand was eliminated, indicating that almost all of the biomass was converted to electricity. The remaining biomass could be composted or otherwise disposed of. Depending on the unit costs, microbial fuel cells could be placed on farms to make use of the biomass produced on the fields, reducing the costs of transporting the biomass to a central processing facility. This would require only an electrical connection to the power grid, something that most farms already have. Other tests are being done with using microbial fuel cells to process municipal wastewater, and have shown success with both producing electricity and treating sewage.

Another option that could be applied to any of these biofuels is using industrial â€˜brownfieldsâ€™ to grow biofuel crops. These areas are often contaminated with heavy metals and other harmful pollutants, depending on the situation plants could be used to clean up the site; a process known as phytoremediation. It could be possible to use plants to extract the pollutants, and then use the plants as biomass to generate energy. This would need to be done carefully, to avoid releasing the pollutants into the air. Lead in the soil is bad; lead in the air is worse. Another problem associated with biomass production in general is nutrient depletion. When a plant grows in soil, it extracts nutrients to use. Over time, this depletes those nutrients from the soil. If plants were continually being harvested and burned or processed into liquid fuel, the soil would soon become barren or would require fertilizers and minerals to be added again. This is possible, but may negate the energy benefits provided by producing the biofuel crops.

Itâ€™s known that photosynthesis has an efficiency of around 16 percent. Even if the entire mass of the plant was converted to usable energy, this is already less efficient than using the sunlight directly via photovoltaic panels or concentrated solar power systems, and thatâ€™s not even factoring in energy losses during processing and distribution, or thermal and mechanical losses in a vehicle. Once those are accounted for, biofuels as vehicle fuel arenâ€™t efficient or economical. To further compound this, ethanol contains roughly 34 percent less energy than the same amount of gasoline, resulting in a 34 percent drop in fuel economy which would also require refueling 34 percent more frequently. Currently biofuel gasoline blends provide a slight reduction in greenhouse gas emissions from vehicle exhaust, and can help a percentage of the population to reduce their oil consumption. Itâ€™s possible that algae biodiesel and cellulosic ethanol processes will become efficient enough to be viable, but until then the main focus for biofuels, a replacement for gasoline and diesel, isnâ€™t nearly as â€˜greenâ€™ (or as realistic) as many people believe.